I inherited some of my Aunt’s photos a few months ago, and looking through them, I was inspired by this fact — my aunt, who was always glamorous and social, who wore beautiful clothes and surrounded herself with beautiful and glamorous things, was also, a cowgirl.

For the first time, as I looked through the numerous photos of her in ballgowns, costumes, tutus, pearls and neat 60s sheaths, I also saw her riding a horse. A horse!

She grew up on the Agua Linda farm south of Tucson and had ranch in her blood. The “farm” was more about feeding cattle than raising crops, and while my grandpa had sold the old ranch headquarters, he still had the Aros Ranch for a while. I never thought of my aunt as a ranch girl so when I found all the photos of her on horseback, I was surprised. I never saw her on a horse, or near one, for that matter.

But in this old plastic bag of photos that I collected from my brother’s dining room table after he retrieved the remains of her estate, I found a few hints of the cowgirl my aunt once was.

Most of the photos, of course, display her understated glamour — many show dinners with my grandma and grandpa, lady’s lunches and social gatherings.

As a stewardess for American Airlines in the 60s, she had her hair styled by Vidal Sassoon, wore her uniform with pride and lived, no doubt, the high flying life of an elite flight attendant jet-setting around the world. Just look at her expression! Don’t you want to know what she is thinking? 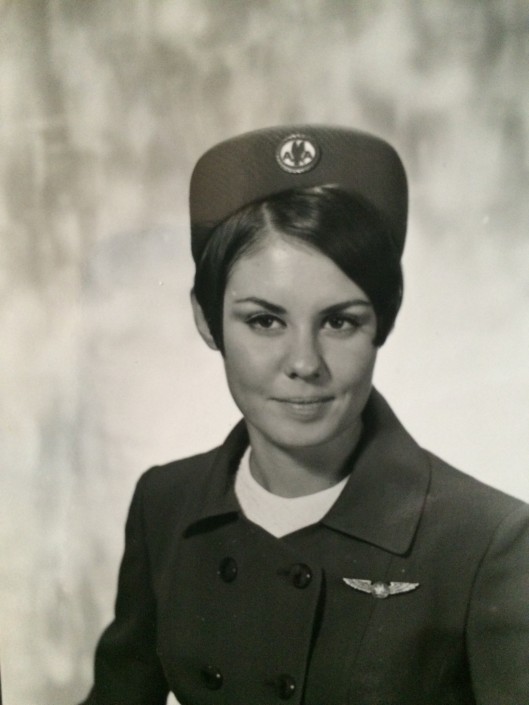 Before she left home, she wore quite a few ball gowns. Here (see girl on right) decked in satin shoulder-length gloves, her hair golden and shimmering as any movie star, she posed for photos at parties I can only imagine.

But here she is on my Grandfather’s  horse Tom Thumb, Nov. 1958 in Prescott. The faded inscription on the back says something about “camp on Plum Creek” and “just before sold” is written below  in purple pen. I can’t even believe she’s wearing jeans and look at her belt buckle! (That saddle looks oddly familiar. I wonder if that’s the one I use today.)

Standing in her white satin cotillion gown, pearls at her neck and bow encircling her tiny waist, she looks pensive. I love how the  black tree enhances her white gown and flowers. The picture is inscribed Dec. 1963, and I wonder where she is heading after this photo shoot? Did she have to drive 60 miles to town or was she already at her destination? (I called my mother and she told me that my aunt was probably heading to the Tucson Symphony Cotillion.)

In the photo below, she smiles at the camera while riding a “big red horse,” as I like to call them–where? I do not know but it looks like somewhere near Tucson. Tamarask and eucalyptus trees rise to the monsoonal clouds. 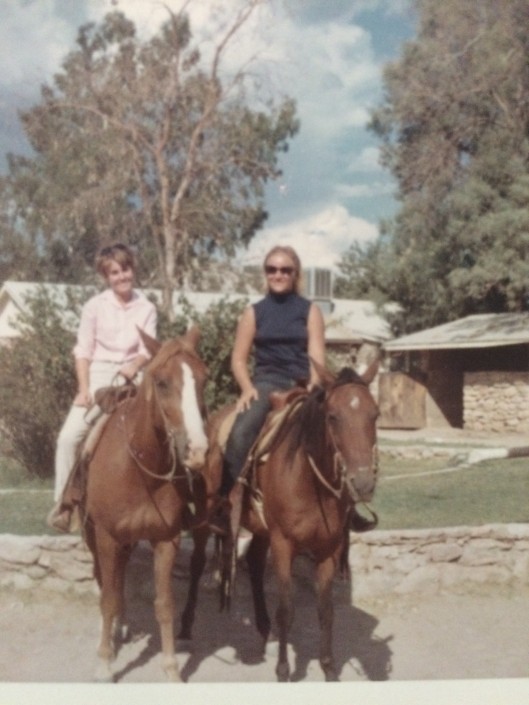 Then years later,  in her red slicker and equally red nail polish, she grips the reins on a winter day. I know that signet ring on her pinkie — I hope one of my nieces have it. 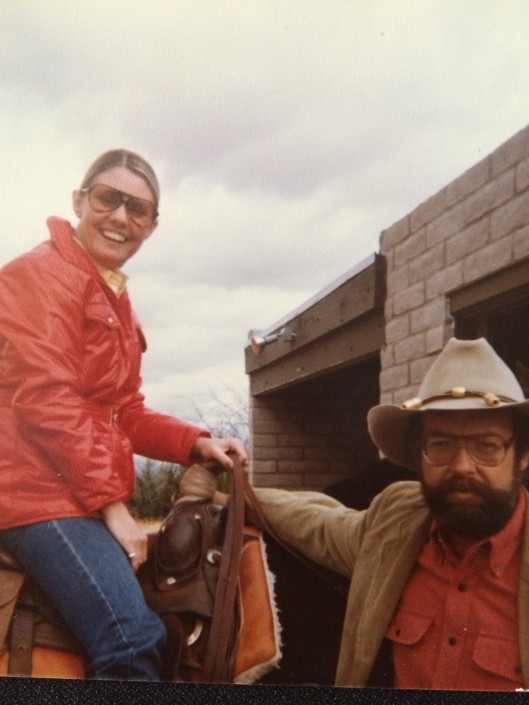 In her 50s and 60s she moved away from Tucson to live with her husband on a homestead in a log cabin in Mule Creek, New Mexico. She had acreage, fought brush fires, and hung wreaths on all the gates along the highway at Christmas time. She seemed to love that life just as much as her Jr. League days. Whenever she went back to Tucson, she let you know how much she despised the traffic. She was content with her country life.

She said, “you go back to what you know.”

When she passed away, way too soon from breast cancer, my sister and I drove to New Mexico and cleaned out her closets. While she had adapted her wardrobe to her rural life, she still had many of her clothes from her old self: lace, satin, and many brocade shawls. The main thing that struck me was how many outfits she had hanging in her two walls of closets. Probably five hundred different outfits were neatly arranged on tiered hangers — each hanger held two or three different outfits: pants and a shirt with a matching shawl. She had more shoes than we knew what to do with–many of them mail ordered and still in plastic wrappers–unworn.

Something of the old cotillion girl hid there in her closet waiting for the next ranch potluck, or maybe, an invitation to a fancy gala in an exotic location.

We can only wonder what possessed her to keep all those clothes.

Here I am as a baby in her arms. I am her namesake and I am proud to have been her niece.

Here’s two other photos that I wanted to share–in the first, she’s in some kind of costume that she no doubt invented and she’s holding a cat ( also in costume) and the other is of her and her favorite dog. I’m not sure here it was taken –maybe along the banks of the Santa Cruz.

Mom and Aunt Nina (little girl) admire the famous corn. This is the stuff they transplanted for the scene in the movie (or so I am told!). I love how blue the sky is.

This Thanksgiving I was thankful for my family, for my work which has kept me insanely busy for a month, and for a day spent in the country this fall learning about one of my ancestor gardens at the Agua Linda Farm.

We spent the day there in October with my dad, my brother and his wife Sherry and my two girls.  The Agua Linda is special to my family because my grandparents lived there roughly from 1950 to 1957 after they sold part of the big ranch. My parents lived there in a small adobe house (that no one liked) and my brothers and sisters were raised there as babies. My grandmother built a beautiful Joesler designed home and changed the name from Reventon to Agua Linda for the beautiful Santa Cruz River that she had a view of from her sweeping picture windows.

So the place is very significant for my family. (And any data I give is probably contestable except for my wedding!)

My family sold it to the Loew family in the late 50s when we could no longer afford to keep it. Members of the Loew family (of Loew’s Theaters and other famous Hollywood names) have lived there since and they have been gracious enough to let me get married there and also indulge in our visits. They have also turned it into a fantastic organic farm that’s open to the public, hosting the greatest pumpkin patch you’ve ever been to. (Of course, I’m biased.) 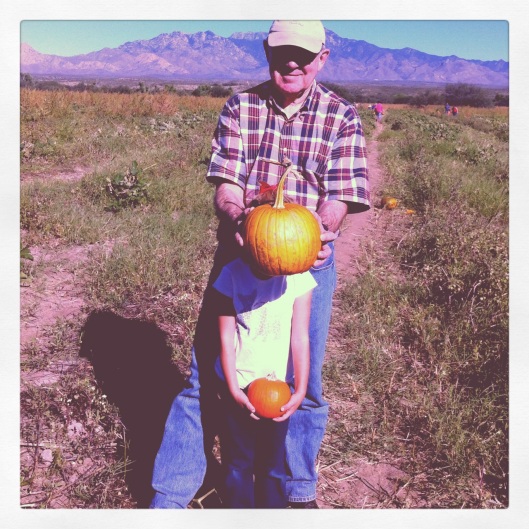 We had a great day there and also a great conversation with my dad who told me all the history I should know and seem to continuously forget. He says it’s a frustrating place for him to remember the crops that didn’t grow and the cattle that he had to sell, but it still seems magical to me and it’s truly one of the most beautiful places on earth. My Grandma was right! And her iris plants (and maybe violets) still sprout along the brick pathways and courtyard surrounding the house.

Well, here are some photos and some interesting things about silage that my dad told me. (I asked about that because my daughter ran away from me in the silage maze!)

Back in the days we started the farm, they had a cattle feeding operation there and they fed raised corn to feed the cattle–Mexican June, was the name of the corn. It grew so high and tall that the producers of the movie Oklahoma used it for the “Corn as high as an elephant’s eye.” No joke. (Later I will post a beautiful picture of my mother standing next to it.) They bought it and took it away from the farm and planted it somewhere else where they filmed that scene. At least, that’s family lore. But here’s the silage details, which are probably boring next to the gossip, but the farmers out there might like it.

“We put 3,000 tons of silage in a pit. We buried it and put water on it and it ferments.  Wheat, soybeans, cotton, …you chop it and ferment it and the cows get drunk on it.”

“First we dug it and with pitch forks feed it to the cattle. Then we found a silage loader. You dropped the silage on a conveyor belt and it went on the feed truck and we fed the cattle. It was the first silage loader in Arizona. Our silage pit was the length of a football field.”

Well, I wrote enough and I’m boring you. I hope you enjoyed the pictures! If you are ever in Tucson, drive south towards Nogales and go to the Agua Linda Farm. There’s a big sign on the highway so you can’t miss it.

Happy Thanksgiving! What garden, new or in your past, are you thankful for?