Here lies my glorious pumpkin, taking up my whole herb garden. I celebrate its robustness–for the first time I actually planted and grew the plants on time and it is  a magnificent vine, full of giant leaves, yellow flowers and tiny fruit. See the picture below–it looks almost mysterious in the morning light, shrouded in mist, flowing down my hill and sending its twining feelers out across the rock steps and over to the apple tree. But if you scroll down to the bottom of the picture below, you will see things are not as they seem. This is not the vital fecund fruit bearing plant it appears to be! No, the baby pumpkins are shriveling!

Gasp! They turn brown and shrivel up and fall off. Not good. I have no words.

Why do I go through this every year? Why can’t I grow pumpkins? This morning after I took this picture, I decided to put on my bee hat and pollinate. I figured that out last year, but I thought that with this giant plant, I wouldn’t have to. But I did and there was one bee with me. Go little bee, do your stuff!

Wow! There’s a lot of pollen in there–some ants too. Well, all of you,  sprinkle that stuff around! Look at it!  I think that’s the male flower. In my rudimentary understanding of the nature of pollination, I put a Q-tip in there and took pollen and stuffed it in the female flower. The female flower, well, looks female and has a baby pumpkin at the end of it. I found lots of males and only three females at my pumpkin fraternity this morning. You get my drift! I have an overpopulation of males–every year, the same situation! Reminds me of my undergrad days, but I suppose that was to my advantage. (Anyway, I didn’t make pumpkins!)

(By the way, morning is good because the flowers are open).

Now what? Really, what I want to know is–what’s wrong? Last year I got one or two pumpkins (from three plants). The year before I got one Cinderella pumpkin. Last year I fertilized them. Last year I planted late and I surely did not have a plant like this. Oh yeah, I fertilized it with something called GROW BIG this morning after I did the pollinating. Geez. All this work for one pumpkin. Now I have to wait and see. It is very hot and humid now so maybe that will help, too.

Honestly, I think the coastal air does something to them. I figured out it’s nearly impossible to grow Echinacea and Black Eyed Susans. That one year I grew Black Eyed Susans was a miracle. This year I bought the seeds from Burpee, I planted them in the ground, I planted a second control group in peat pots–guess what? One flower. ONE flower from all that.

It didn’t taste that bad. (But it didn’t taste quite right either so no one else would eat it but me pretending that I had done the right thing.) There are three more left safely on the vine, waiting ripeness.

So, while my garden isn’t going exactly how I planned, I finished a draft of my 2nd novel this week. Yipee!

I planted some seeds about two weeks ago. I  put them in my plant “nursery” area where good things seem to come up on their own.

I am going to do an experiment and plant them in seed cups too to see which do better. I want Black Eyed Susans (Rudbeckia, Tiger Eye Hybrid and Indian Summer from Burpee) in August and I’ve only had random success with them in the past. Random meaning I planted several seed packages and got maybe two plants. But they were wonderful plants. Last year, I planted the seeds too and got nothing. They seem tempermental. So this year, I tried again. I planted Coneflowers (Echinacea, Magnus) too since I keep reading about them.  I hope my new seeds grow soon. We are having a winter storm today so at least they are getting watered. Here is a nice Scabiosa from my garden. 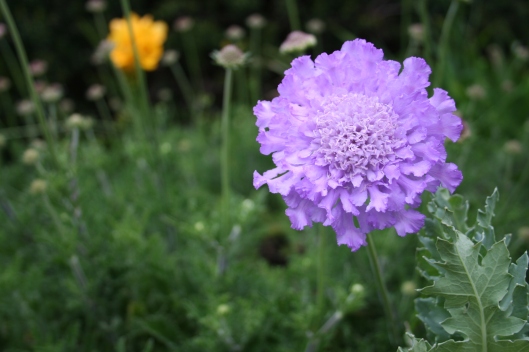 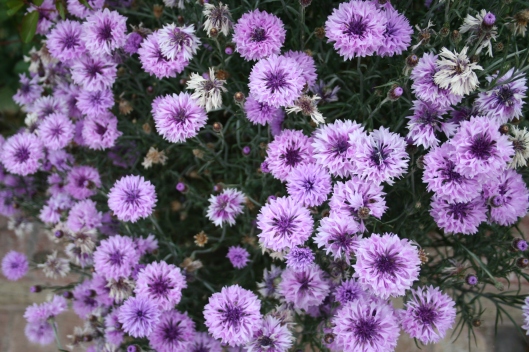 Bachelor Buttons growing by the rose.