I haven’t done a chicken update for a while. So sorry, gals! They are remarkable and we now get three eggs a day. Along with our garden goods, we are feeling somewhat self-sustaining these days. I just need a goat!

We had an ongoing debate whether our chicken named “Grilled” — terrible name, I know–blame my thirty-year-old nephew for that—but back to my point—we all thought grilled was a rooster. While the two Buff Orphs were laying eggs every day, Grilled was turning on us and pecking so hard that she the broke skin. She made odd cackling noises in the morning.  Bigger and more decorated than the other two, she also had sprouts of rooster-like spurs on her legs, a larger comb and wattle. My daughter took to carrying a stick or broom around with her to protect herself from Grilled “attacks.” She came in the house crying a couple of times, not because Grilled pecked at her, but because she was sure Grilled was a rooster and we’d have to “send him back.” I had no idea if the feed store would really take him. I’d had calls from friends in similar situations who went back to return a rooster and ended up driving around to various East County feed stores because they were all “full” of roosters and couldn’t take more. My one consolation was that Grilled never crowed, which seemed to be the 100 percent sure sign of rooster-in-the-coop.

Two blondes and a red-head.

Then one day, Grilled laid an egg. Whew! Grilled’s eggs have a very nice dark brown shell. Grilled likes to sneak off to find little nests in secret places like the corner of the fence under the bottle brush tree. She did that last weekend—more crying and screaming from my girls. “Grilled is gone,” the cried. “She’s lost!” We all ran around —well, like you know what—looking for that damn chicken. Of course, I found her after the hysteria had gone on for about 30 minutes. I was not about to stick my hand under her to grab the egg and shoo her out of her sneaky nest. Later I went back and there was an egg. Later my husband went back and took away her nest! Poor thing.Anyway, the most challenging part of the chickens, which I find relatively easy to care for in exchange for all the lovely eggs and entertainment they are giving us, is Cleo, the puppy. And, the fact that the two blonde chickens are hellbent on escaping their “free range” area and stepping right into the waiting jaws of our six-month-old pup!

Now our old dog is very good with the chickens. He tried to eat them when they were chicks–you might recall in a past post, but he is sensitive. You yell at him once, and he won’t do it again.

Cleo at her graduation from puppy school earlier this summer.

Cleo on the other hand–as you can see she is a puppy school graduate–but that doesn’t matter. Here’s her perspective: I am out in the yard. Yippee. Yawn. I’m tired, but really I’m full of energy. I’m chewing leaves, crunch, crunch. I’ll eat this stick. Hey, looky there!!!! A fluffy flying thing–it’s coming to me! Ha. And look at that fat fluffy blonde, squeezing between the slats of the gate my dad built to keep me out. Yeehaw! It’s my lucky day! Those fluffy squeaky toys are heading up the hill. Hey, they must be bad, I must stop them, I am a herding dog! Oooo, really…I must eat them–no I shouldn’t–but a taste of feather–oOOOO. Delicious and disgusting–yet, why did that thing squat down. Who wants to chase that limp, prone bird? Is it dead or is this a trick? I am a smart dog. I cannot be fooled by a bird. Oh no, here comes mom with a broom. She’s screaming at me, again! Oh, I must stop myself. She looks mad. She is picking up that fluffy thing and making noises that she usually says to me when I get stepped on. I will chase the other one. Yikes! more broom, swishing the air near my butt!  How does she do that?

Okay. We use brooms a lot around here. (Note to husband: I did not say ride brooms.)

Puppy vs. chicken. Neither of them are learning! Why two fat little birds squeeze themselves through three or four-inch slats on the gate to get chased by a puppy, I will never understand! For now, I’m on standby with my broom–it keeps Grilled chicken in line, and Cleo too! 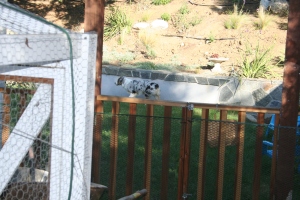 Cleo waiting for chickens to come out and play.

Thanks to a few days at BlogHer, I have some new ideas. First of all, after being inside for three days, I really need to get out and garden!

At the beach on Sunday, I realized most of my friends — most of whom are gardeners too — have too much squash right now. We can’t give squash away to each other anymore!

My friend Rebecca brought zucchini muffins, which we all ate, expect my husband because he thinks vegetables disguised as desserts or breads is trickery. (I could write a lot about his food habits, but will spare you.)  I planted only yellow squash, and I don’t think that is good for fried squash blossoms or muffins but heck, I may try it soon if I get tired of eating it with my dinner (or lunch as I did today). Plus no one else in my family will eat it — back to the weird food habits story that I haven’t written about yet. I am the primary squash eater of our household. Yay for me!

Anyway, one recipe that my friend Julie  suggested was very delicious and simple. You can use the grill or roast the veggies in the oven. It feels very summery and even my husband tried it! Here goes:

Slice vegetables 1/4 inch thick and dilute the pesto with a little olive oil. Toss vegetables and add salt and pepper to taste. Grill or roast in oven.

There you have it. Thanks, Julie!  Something else to do with all that squash (and Japanese eggplants, too!)

Eat well tonight and garden until the sun goes down.