It was a great gardening day today in Southern California. We got a lot of things done that we had on our “to do” list.

At lunch I talked to my friend who reads this blog and she told me I never explained what happened to my chicken after Cleo attacked her. The short story is that she is alive and well and laying eggs. The long story is that about ten days after the attack my daughter came in every upset because she found a giant scab covering a wound on the back of Doodle’s neck. It looked like a wad of tar the size of a small fist. The feathers were gone or falling out. Doodle was lucky to escape with her life. She hid her injury, and despite seeming extra scared of the dog, went back to laying eggs shortly after her attack. In fact, she was the first to give us an egg after a three-month break. We are so lucky and we keep a much better eye on the dog around the chickens.

Today, we made some adjustments in the henhouse and attached their roosting branches to the walls. They were loose before and the chickens had taken to sleeping in the egg box. Now that they are laying again, I want them out of there at night to keep it clean. I am going out there right now to spy and see where they are sleeping. If they are in the egg box, I will push them out! Ha!…

Well a sleeping chicken won’t budge. JHnny and Chicken Little were in the egg box but Doodle was perched on the roost. I was able to shoo Chicken Little on the branch–she was very compliant, but Henny wouldn’t budge. I tried to gently push her but she pushed back with force even though she seemed to be asleep. I thought she might fall out of the egg box, if I pushed her too hard, so I gave up. I will try again tomorrow.

Here are some photos from the garden today and the jobs we did: weeding, although in a drought there aren’t as many weeds; putting compost on all the perennials–finally I am using my compost out of my compost bin–it’s been a really long time and I’ve never used it; planting alstroemeria on the hill and dividing my Princess alstroemerias; fixing sprinklers in the front yard and beginning to replace the base of our old fountain.

One thing I learned about the alstroemerias–the Princess variety that I have on my upper hill are short stalked and grow close to the ground. The pink ones have been very hearty and fairly drought-tolerant. They get full sun up there. I could not find them at my local nursery so I gave up and bought the regular variety for the far right side of the hill–the ugly side. I hope these grow. I wanted orange ones but they don’t seem to have those either. Anyway, I hope the two I planted will grow.

We have some flowers on the apple and the nectarine. The peach is not flowering and I hope I pruned it right. It’s almost time to replant to veggie garden but we still have peas, lettuce and our tomatoes are ripening. Isn’t that crazy? We planted them in November and just ate our first cherry tomatoes last week. The weather is all messed up!

At least it is supposed to rain this week, and I have put the compost out so I am hoping it refreshes everything. 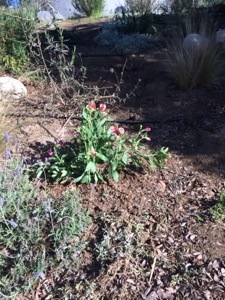 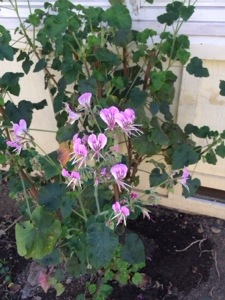 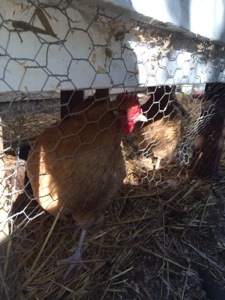 2 thoughts on “Sunday in the Garden: Doodle Update”