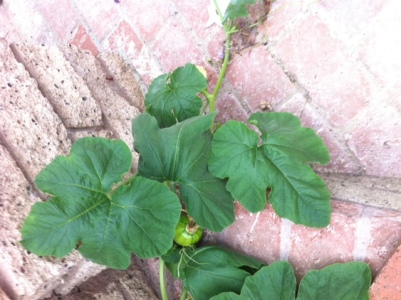 Now I planted seedling pumpkins in July. I know this was late, but I am always hopeful. I hope I will have Thanksgiving pumpkins. But again I had problems. Some little baby pumpkins came but fell off. Some plants had only male flowers — how in the heck is that possible? Anyway, while I was discouraged, I was happy to find some real little gal flowers with baby pumpkins at the base along with some male flowers. Now that I read about fertilizing them myself, I decided to get on it.

That sounded wrong…what I meant was, I was going to have to cross-pollinate my pumpkins. First of all, I probably planted too few and too far apart.  I had to plant them in the front flower beds because we are going to re-do our backyard. Since I bought them late, I only bought one of each variety–a Cinderella, a baby bear and a Jack be Nimble (or something) plus a loofah gourd. Don’t ask me why I bought a loofah. I don’t really like them, but I was fighting some lady at Walter Andersens who was also there buying late pumpkins. We were helping each other, sort of. I got the loofah.

Well, I used a Q-tip. That seemed scientific. I stuck it in there and got as much pollen on it as I could and then I ran around to the Cinderella, the Baby Bear and the loofa and rubbed pollen in all the lady flowers. I thought maybe I should have on some Marvin Gaye. I felt a little embarrassed, like I was doing something naughty.

But you know what, I got a pumpkin. See the one in the photo! I hope it makes it. I hope I don’t get some weird loofah pumpkin hybrid. I’ll keep you posted.

P.S. I went to Olivewood Gardens last week in National City. It is a really neat place. More on that later.

Oh yes, plant your sweet peas and wildflowers now. I started. You can do it in ten minutes if you have a prepared bed, or if you don’t, sweet peas and wildflowers will grow just about anywhere there is sun and water. I don’t have much room for planting right now (plus the pumpkins are taking up a lot more space than I anticipated). I had to find little empty spots around the yard.